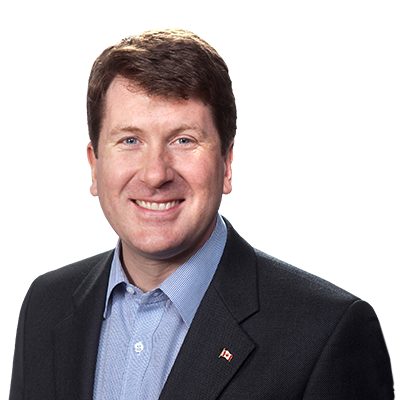 Member of Parliament John Williamson has over 25 years of experience in public policy research and conservative movement activism. He was returned to Parliament in 2019 representing New Brunswick Southwest. He is chair of the Atlantic Conservative parliamentary caucus and a member of the House of Commons committee investigating all aspects of the Canada-China relationship.

John was also the MP for New Brunswick Southwest until 2015. Prior to his election to the House of Commons in 2011, he worked as Stephen Harper’s Director of Communications in the Office of the Prime Minister.

During his time in Parliament, John successfully led efforts to reform gold-plated pensions for Members of Parliament, introduced a Private Member’s Bill to eliminate lifetime parliamentary pensions for federal politicians convicted of criminal malfeasance, and voted with Conservative colleagues to end the Liberal’s wasteful and ineffective Long-Gun Registry.

In 2016, John launched Canadians for Affordable Energy to promote the benefits of energy affordability. He was National Director of the Canadian Taxpayers Federation (CTF) from January 2004 to September 2008, and CTF Ontario Director from September 2002 to December 2003. He has also worked for the Atlantic Institute for Market Studies, is a past Fellow with the Manning Centre for Building Democracy and Senior Fellow with the Fraser Institute.

Before entering politics, John campaigned on behalf of the CTF to lower income and gasoline taxes and expose wasteful government spending. He supported the Conservative Government’s two-point GST cut, a one-third cut to Canada’s business tax rate and its monthly child-care allowance paid to parents with young children.

His work has been featured in national publications such as the National Post, Maclean’s magazine, Toronto’s Globe & Mail, Toronto Sun, CBC News, Vancouver Sun, C2C and others.

John is a former National Post editorial writer (1998-2001) and founding member of the newspaper’s editorial board.

He has a master’s degree in economic history from the London School of Economics and earned a bachelor’s degree from McGill University after graduating from Fredericton High School.

In 2012, John met the love of his life, Kelly. Kelly Williamson is a Commander in the Royal Canadian Navy who has served both at sea and ashore and also worked with the Canadian Army, Special Operations Forces Command, and Canada’s Disaster Assistance Response Team. In 2018, Kelly was invested into the Order of Military Merit.

John & Kelly have a sweet baby girl: Charlotte Tessa Abbigail Williamson. She was born on July 2, 2020. They live in St. Andrews with the family’s Cairn terrier Teddy. Teddy is from Harvey, New Brunswick.